“Adults and children huddle around a brazier, or coal fire, to hear ghost stories.”

“A man, perhaps the artist himself, has set down his calligraphy brush and reaches to extinguish a lamp. Once darkness falls, the demons will appear.”

To Signify: A Tincture of Pink

Night Parade of One-hundred Demons was created in 1890 by the great Japanese artist Kawanabe Kyōsai. He is considered a father of modern Manga. Wildly inventive, energy on a high boil, a Mad Magazine sensibility with rampant gift. The Public Domain Review featured this work recently and I was struck by one of the tropes. Although this artist’s palette can often be robust, in this series of horrors he employs almost nothing but pastels. Notably pink, with a few blood-red exceptions.

Why? We can’t ask him but can still make observations. Maybe he’d agree.

I think it’s to slyly invoke creepiness via contrast. Where you’d expect garish you get pastel. But a monk with his eyeballs hanging down his cheeks? Pastel? Instead of robust primaries or blue-note tertiaries?*

Before the demons come there’s  first a scene of a winter family huddled around a brazier waiting for ghost stories. A mild pink cloud hovers toward the ceiling. Next we see an artist stretching in strange elongated posture to extinguish the last lamp. The pink cloud now droops directly above him, close to the  page bottom. (Both images above. I regret that the subtle pink clouds appear some degrees less telling here.)

Only now does the demon parade begin its romp.

The parade is a book, bound on the right, in which the postures on one page lead naturally to those on the next.

As with much of Kyōsai’s very best work, the luridness doesn’t come from any single source so much as the accumulation of fine, sickly details—like the pink, almost pornographic tongue dangling from the horse-man’s mouth. First these details creep up on you, then they overpower you.
Jackson Arn on Artsy

“Skeleton soldiers, a horse with the head of a man, and other monsters advance in the growing darkness.”

In the sweet tones of candied almonds.

A work of visual art.

Compare words. Words exist expressly for humans to signify to each other. Anyone who has diagrammed a gnarly sentence appreciates how grammar rules — like baseball rules — bring structure, stave off ambiguity. Not so in the visual arts. Imagine if English, Vietnamese, Tagalog, Bantu and Norwegian were used in one communication. To start — whose grammar would you use?

In art you can even throw in the kitchen sink. No one gets to cry out “That’s not what’s in the dictionary!” Art’s meaning can never be pinned down in a words. Even Moby Dick — because it’s words plus art.

Little truths are like artworks. They’re opinions, ways of seeing, possible but not ironclad Truths. Here’s another way to think about pink. 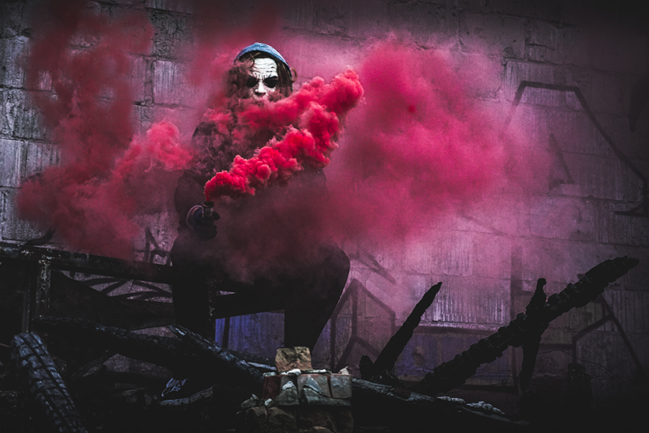 They remind me of garden wind-chimes tuned to the moody blue notes. (Blue notes are used in many blues songs, in jazz, and in conventional popular songs with a “blue” feeling, such as Harold Arlen’s “Stormy Weather”.) Wikipedia